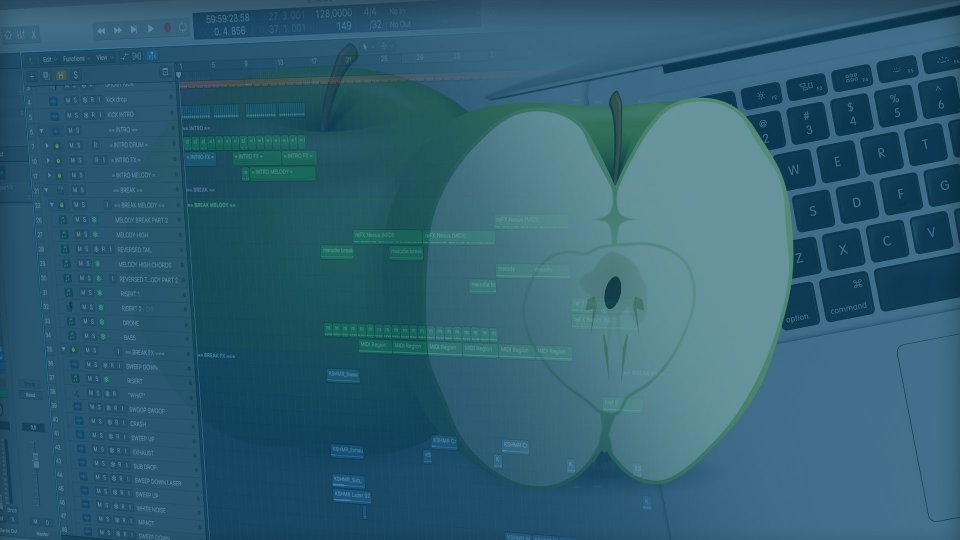 Written by: Dexxter Clark, 27-11-2019
Why do musicians use iMacs in 2020? The easy answer is: because they probably think they need to.
Is that true?
If yes, is it still the best choice today? With all the current technology?
That is what we are gonna talk about in this article.
In the nineties and the two-thousands making music on a computer was hard.
Not only the software programs were scarce, they were also unintuitive.
Making music for game console like the Super Nintendo and the Genesis was literally programming a computer.
You had to tell the computer: generate a square wave on 440 HZ for 10 milliseconds, next generate a square wave on 466 HZ for 15 milliseconds.
This process was tedious and slow.
On top of that, you needed to be an extremely good musician to make the music not sound “bleepy”.


Reason 1: Macs used to be better

But also computers weren’t up to snuff. Stand alone synthesisers were actually tiny computers, so the border between music instruments and computers faded.
Macs were the default computers by choice back in the day, because they were just easier to use.
In the days we were fiddling with DOS commands to set the right IRQ`s to get our Soundblaster 16 to work.
Musicians on the Mac were already composing their first notes in the same timeframe.
A Mac was just the better computer, because they just worked.
For a musician is was easier to stay in the creative flow because you didn’t have to worry about all the technical details.
The PC has caught up big time!
Computers became faster and Windows got more stable over the years.
Software to make music improved and even got a name: DAW (Digital Audio Workstation).
One of the first programs that was a huge improvement was Cubase by Steinberg.
Cubase was only a MIDI sequencer back in the day, so no samples or audio editing whatsoever.

But nowadays, most major DAWs have versions for both Mac and Windows.
The major reasons to choose a Mac for musicians were pushed to the background.
To make matters even worse for music producers, the Mac isn’t Apple’s priority anymore.
Apple is focussing more and more on their iPhones, because it generates their majority of their revenue.

This showed clearly in their Mac Pro lineup from 2013 to 2019, meant for professional users.
The Mac Pro (also called “the trashcan” by many) was difficult to expand.
Apple somehow thought that professional users didn’t need hardware upgrades.
To top this off, they didn’t update the machine for three whole years (2015 - 2019).
Three years in computer world is a lifetime. The Mac Pro for professionals simply wasn’t a priority.
Apple`s professional laptop line called the MacBook Pro between 2015 and 2019 was even worse.
The keyboard (called the butterfly keyboard) cause issues iteration over iteration because dust settles under the keys.
On top of that, the notebooks were plagued with thermal throttling issues.
The processor had no way to cool down, it got so hot it needed to slow down to prevent itself from breaking.
This meant that your laptop couldn’t perform to its max (which is a huge no-go for the professional), but the competition on the pc side could.
Both issues were caused by Apple’s obsession to make notebooks smaller and smaller instead of better and better for the professional users.
Apple’s vision is to keep everything in-house, also repairing and upgrading your own computer.
They started to solder components to the motherboard of the computer that were exchangeable before: the processor, memory and storage.
This means that expanding your memory or replacing your storage isn’t possible.
A downside to SSD’s is that they “freeze” in a couple of years.
The storage cells of an SSD have a limited write capacity. Once exceeded, your SSD stops working from one minute onto the next, without prior warning.
Replacing is not in option because the SSD is soldered to the motherboard.
This basically means that the days of your Mac are basically numbered once you switch on your computer for the first time when your SSD is soldered to your motherboard.
My SSD took 5 years to freeze.

In 2017 Apple introduced the T2 chip.
The official story by Apple is that the chip is for security, but the timing couldn’t be more suspicious because of lawsuits around Apple and the right to fix your own computer.
From this conspiracy perspective, the chip basically prevents you from replacing (soldering and desoldering) components on the motherboard.
This however becomes a problem for the user when the software (MacOS) can’t properly handle the chip.
Users starting to report “bridge OS” crashes, which is MacOS’s equivalent to the Windows blue screen of death.
Your computer reboots and all your unsaved work is lost.
The problems went on for years and still weren’t fixed as of the writing of this article.
Why is Apple not fixing the issue?

Mac enthusiast like to use the argument of stability.
That myth that started in the nineties, and that was maybe true then, but doesn’t have to be now.
I can assure you that a well built PC is as stable as a Mac, when you don’t cheap out on components.
In light of the problems with the T2 chip, that argument is even flipped around:
A well built pc is probably more stable than a Mac with a T2 chip.

"It’s just better quality” is what most Apple fans say.
It can be, but over the last decade were dozens of cases that proved otherwise, the most famous example: the butterfly keyboards in the MacBook Pro I talked about it earlier.


Reason 4: Works out of the box

A Mac can work out of the box, but so are most PC’s nowadays, so hardly an argument.

Mac fans do have a valid point when it comes to audio drivers.
The support for audio drivers is superb in MacOS, it’s stable and fast.
I plug in my Focusrite 2i2 soundcard and it works without any installation or configuration.
Microsoft take some lessons from the fruit company in that regard.

There is a second reason that Mac fans have in their advantage: viruses.
In my opinion something that Microsoft has battled far too little over the last twenty years.
It’s not that there aren’t any viruses for MacOS, but there are far less.

There are more differences between Mac and PC.
I discuss them in great detail in this article: https://www.learnhowtoproducemusic.com/blog-how-to-start-music-production/mac-or-pc-what-is-the-best-computer-for-music-production


Why are musicians STILL using Apple today in 2020?

With all the problems I described, why are people still buying Macs?
That is a good question which I can only answer by speculating:

First of all: an Apple computer is a status symbol, the same reason why you drive a Ferrari over a Volvo.

Second, personal preference.
To be honest, I’m not so font of Apple’s ecosystem, Apple’s policies and the quality of their hardware, but I like MacOS over Windows.

Third, I think is that most people are not well informed about computers in general.
Apple’s marketing department knows that all to well.


Would I recommend a Mac for music production?

Consider all the pros and cons of a Mac computer and make a well educated decision for yourself.
Do not buy a Mac because it looks cool or all your friends have one.
The reason why I’m mentioning the downsides of Macs is to help you understand that the glossy image of Apple for music production is not as glossy as most music producers seem to think.
The PC is viable (and in some regards even better) alternative to the Mac for music production.
Personally, Apple needs to do a better job with their Macs for professionals (including music producers) than they are doing right now, before I would consider it.


About computers (and laptops) for music production